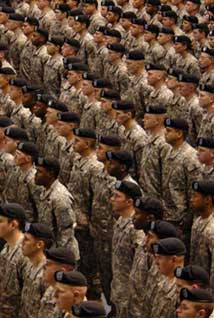 I was reminded today of a story about managing people. About 8 years ago I was in my first management job, managing a team of about 15 web software designers and engineers. I saw a key challenge in bringing the team together, inspiring one vision and building a sense of identity and unity within the team.

At the time, I was fresh out of the Army, and was still active as a part-time Army reservist. I took to calling the team my “troops”, and turned some of the key challenges we faced as a team into our “key battles”. I saw it as a term of endearment to the team. In my mind, I saw it bringing a sense of unity and a common, understandable vision to the team. I saw it flattening the hierarchy, putting us all at the same level to encourage shared responsibility and the willingness to speak out. I saw it helping to build individual relationships between each of the team members. (Looking back, I think subconsciously I also hoped it would help give me, as a very young manager of an experienced team, a sense of authority; but I wouldn’t have told you that at the time.)

All-in-all, I saw it as a positive, understandable and motivational message. Indeed, military expressions like “rallying the troops”, “strategic battles” and “war rooms” were common in business parlance then, as they are today.

In reality, though, the team themselves saw something quite different. In short, they hated it. They hated being referred to as “troops” or “soldiers”, which they found disrespectful. Where I saw it flattening the hierarchy within the team, they saw a new hierarchy emerging: one with officers who sit back and give orders and soldiers who follow them. Where I saw it encouraging initiative and shared responsibility, they saw themselves reduced to simple soldiers who just follow orders and are not expected to think for themselves. On top of that many found the frequent references to war and battles offensive and tiring. (This was just after the second invasion of Iraq, and soldiers were still dying every day in Iraq and Afghanistan.)

I learned two very valuable lessons from this in my young management career.

Firstly, be very careful with military references in the workplace. While it’s still common in business to hear talk of “battlefronts” and “attack plans” and so on, I’ve learned to be cautious with how often, and in which situations, I use these. I think in the context of a conversation between a few people it’s probably ok; but I wouldn’t frame the team objectives/targets for the year in terms of “battles” and “wars”.

Secondly, sometimes you just don’t know how people are responding to the messages you deliver and the things you say. As a manager, when setting a vision or delivering a message, you need to remember that your job isn’t done until you can confirm that the message was heard and understood by your team in the way you intended. For my example above, how could I have known that my efforts to bring the team together were not working out as I had intended? I think the answer is: ask. Ask for feedback from individuals, from the team. Just like in agile and scrum, constant feedback helps you constantly iterate and adjust, which applies as much to management and communication style as it does to code.