A team of security researchers behind a popular mobile firewall app say they’ve identified tens of iOS apps that are collecting location data from iPhone users, data they later pass on to monetization firms.

In all cases, researchers say, the collection occurs via packaged tracking code monetization firms provide to developers to embed in their respective apps.

The only surprising thing about this is that there are only “tens”, not hundreds, or thousands.

Back when I was at Nokia/HERE Maps, I was managing a product with several million active users. I was contacted nearly daily by advertising or data monetisation companies, offering us easy money to just add their small SDK to our codebase…

These companies make an offer for developers that’s easy to accept… spend a few hours implementing their SDK, and forget about it… and in exchange, receive “free money” for every active user. These companies are especially interested in apps that collect or handle location information.

I do have some sympathy with the developers who accept the bargain… the app business is a brutal, hard one, and when you’re trying to turn a profit, a few extra cents per MAU for essentially no effort can seem like a great deal… but you’re selling your customers’ privacy, and in the long run that’s going to backfire.

My advice to app developers is to reject the seemingly free money, and stay focussed on building great value for your customers, and building your monetisation model around that. Going for the easy money might make your ARPU look momentarily better, but it’s not what your customers are paying for.

At this weekend’s Product Camp in Berlin I held an interesting session on Monetising Consumer Experiences. The discussion was good and we had great input and perspectives from everyone in the room.

Here are my notes from the session:

Why do we care?

Every product manager needs to understand their business model. Remember, an idea is not a product – and it’s certainly not a business. Irrespective of who ‘owns’ business strategy in your organisation – whether it’s you, your CEO or a distant corporate strategy department – it’s critical that you understand the complete business model your product is a part of. A customer’s journey through your product doesn’t just start at the welcome screen of your app, website or whatever.

Whatever strategy you use, each requires you to understand where the value is, and what value a user is likely to be willing to pay for.

Also remember to ‘zoom’ out and look at the broader ecosystem. Who else is benefiting from your product? Who else should, or could, pay? 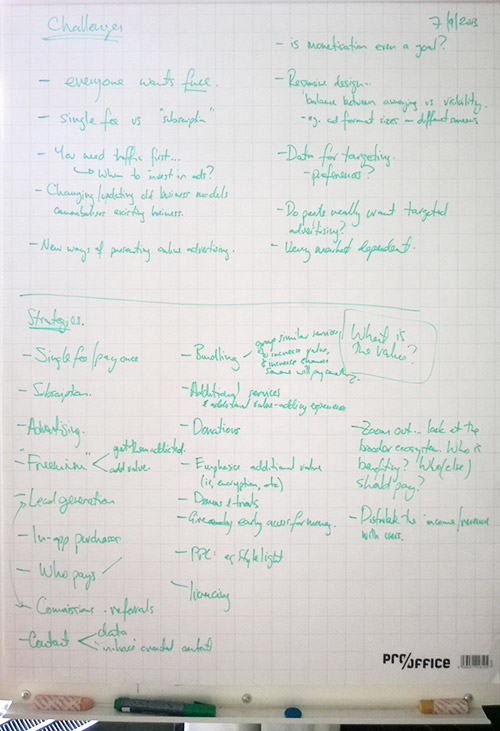