I don’t normally think much of lists of productivity tips, but I quite liked this list from Quartz: Ten things to do on weekends to make your Monday more productive.

The article starts with the oft-quoted statistic that productivity declines rapidly after more than 55 hours per week:

“The study found that productivity per hour declines sharply when the workweek exceeds 50 hours, and productivity drops off so much after 55 hours that there’s no point in working any more.”

So if you’re not working all through the weekend, how can you use that time to give yourself the biggest productivity boost come Monday?

Most productivity “hacks” are nonsense, but I found myself agreeing with nearly all of the recommendations on this list. Particularly:

With so few hours in the day, where you spend your time has a huge impact on your overall success, and reactively moving from one thing to the next is the best way to fill lots of time with being busy and not getting much done. Take the time to step back, reflect and plan.

When Reid Hoffman talks about building a startup, he says it’s like jumping off a cliff, and assembling a plane on the way down. It’s a reference to the fact that when you start building a startup, you set a clock ticking.
If you can find product-market fit and a viable business before the clock runs out, your startup has a chance of success. If you can’t, then you’re in for a hard crash landing.

That’s why for startup product teams it’s critical to move as fast as you can. The most valuable resource you have is time, so you need to be extremely wise with every hour you and your team spends.

The key to moving fast is not to work harder, but work smarter. It’s not about working weekends, skipping lunch or pulling all-nighters. It’s about making smart choices about how to get things done.
Here are a few ways to think about moving fast.

Stand on the shoulders of giants

Isaac Newton famously said: “If I have seen further it is by standing on the shoulders of Giants.”

When building a product, don’t be afraid to borrow from solutions that already work. Steal what you can with pride. Look for existing patterns and use them. Don’t waste time re-inventing the wheel, especially not in areas that aren’t key to your differentiation.

But not all constraints are equal. Some are very hard, and others are flexible.

Look at the constraints you have and ask: which ones are flexible? Which are not even constraints at all?

Can you simplify the task by challenging one of the constraints?

Do the simplest thing first

Alfred Einstein said (approximately): “Everything should be made as simple as possible, but no simpler.”

Complexity is the silent killer of products. Complexity is a poison that spreads lethargy and chaos in your startup. The more complex your product, the harder it becomes to maintain. Avoid complexity at all costs.

Always start by doing the simplest thing first. Ask this key question: What is the smallest, simplest thing we can do that will validate our hypothesis and deliver value to our customers?

I’ve seen people (and whole teams) bang their head against a hard problem for days, or weeks, without asking for help. Sometimes it’s a mix of stoic determination and pride; sometimes it’s that feeling of being ever-so-close to cracking the problem… for days and days on end.

Productive people know how to ask for help early. Whatever the issue is that you’re facing, the chances are there are people out there who can help you. Sometimes a point in the right direction is all you need to unblock yourself and save hours or days of wasteful wheel spinning.

First and foremost, use your colleagues. Don’t be afraid to ask more experienced team members for help early on. It’s not your job to know all the answers; it’s your job to find the answers. There is no shame in asking for help! It’s how great people learn.

Second, build your network outside of your team. This could be in your company, or outside it. Find the networks, groups or meetups in your area of expertise, and use them.

If you have any questions or would like some more detailed tips, get in touch!

<tl;dr>
The iPad Pro is a capable machine for getting all kinds of “real work” done while on the go.

After much deliberation, I bought myself a new iPad Pro 9.7″ about four weeks ago, and since then I’ve been running an experiment to see if I could use my iPad for “real work”. Inspired somewhat by Steven Sinofsky’s treatise on why his iPad Pro has stickers, I wanted to see if I could leave my MacBook at my desk all the time, and only take my iPad with me when I’m on the move (in meetings, working remotely, etc).

My MacBook has been chained to my desk for three weeks now, and since then I’ve written blog posts (like this one), worked on spreadsheets, taken handwritten notes, read and responded to email, set up meetings and managed my calendar, presented with slides at meetings and taken notes, joined video conferences, made drawings, including a few lessons from a “learn to draw” course, surfed the web, read and marked up eBooks, written Python code, played games, watched Netflix, Amazon Prime Video and the European Championship, booked flights, ordered groceries, bought clothes on Zalando and bought other stuff on Amazon: all from my iPad. It is truly the most versatile computing device I have ever used. 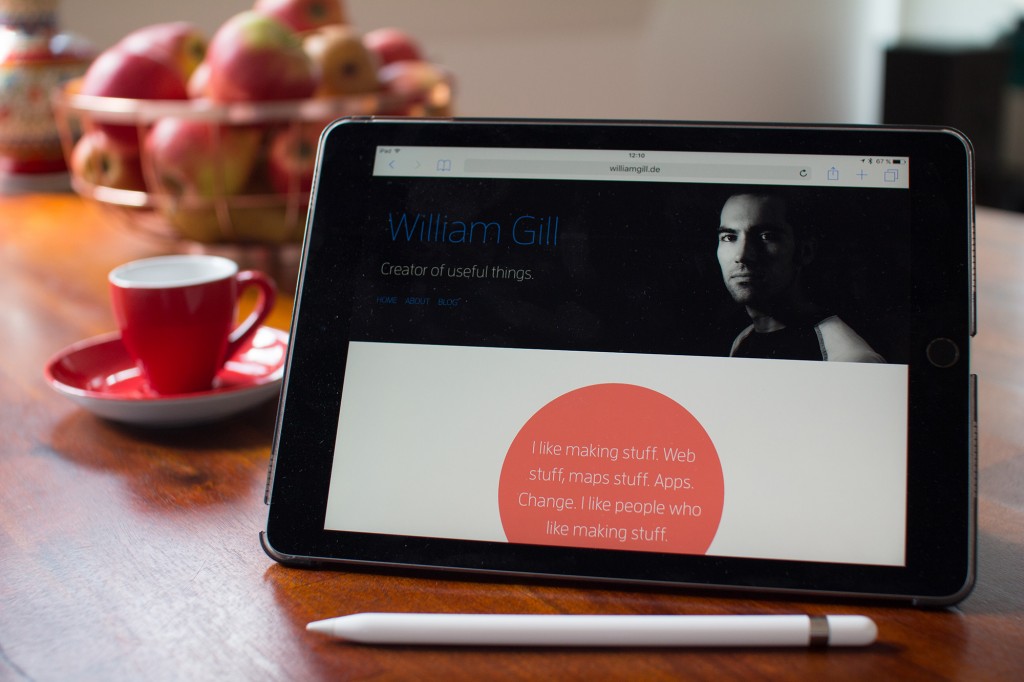 The iPad is a capable machine for doing “Real Work” on the go.

In many ways, all of the things you wanted to do with your first iPad, but couldn’t, are now possible. The hardware is faster, lighter and better, for sure, but the biggest improvement is the software, both iOS and third party apps. Thanks to iOS extensions and multi-tasking, apps work together better than they ever did before. Persistent cloud services are baked into everything, so data and preferences are immediately synchronised across all your devices and available everywhere. Microsoft’s Office suite is now thoughtfully designed for iOS and they plug into OneDrive perfectly, and meanwhile Dropbox, which I use for personal files, is integrated into all other apps that I use so I can get files in and out of other apps easily.

I had an iPad 1 when they first came out in 2010, and I bought an iPad Mini Retina a few years ago. Neither of these devices found a way into my regular work routine. Neither was in any way capable of replacing my MacBook for anything other than web browsing, and with an iPhone in my pocket there was little upside to offset the added weight and hassle of carrying the thing around, so I couldn’t find a way to build them into my workflow in a meaningful way. There were too many reasons doing Task X on my MacBook or Task Y on my iPhone was just easier. The iPad 1 was quickly relegated to the coffee table by the couch for occasional web surfing, and nothing else, and my daughter appropriated the iPad Mini as a Netflix device. Now, however, with the iPad Pro I can safely leave my MacBook on my desk for the most part, and use the iPad in all the scenarios when I want to be mobile.

There are plenty of ‘real work’ tasks that I could easily get done on the iPad Pro while away from my desk. Here are some observations: 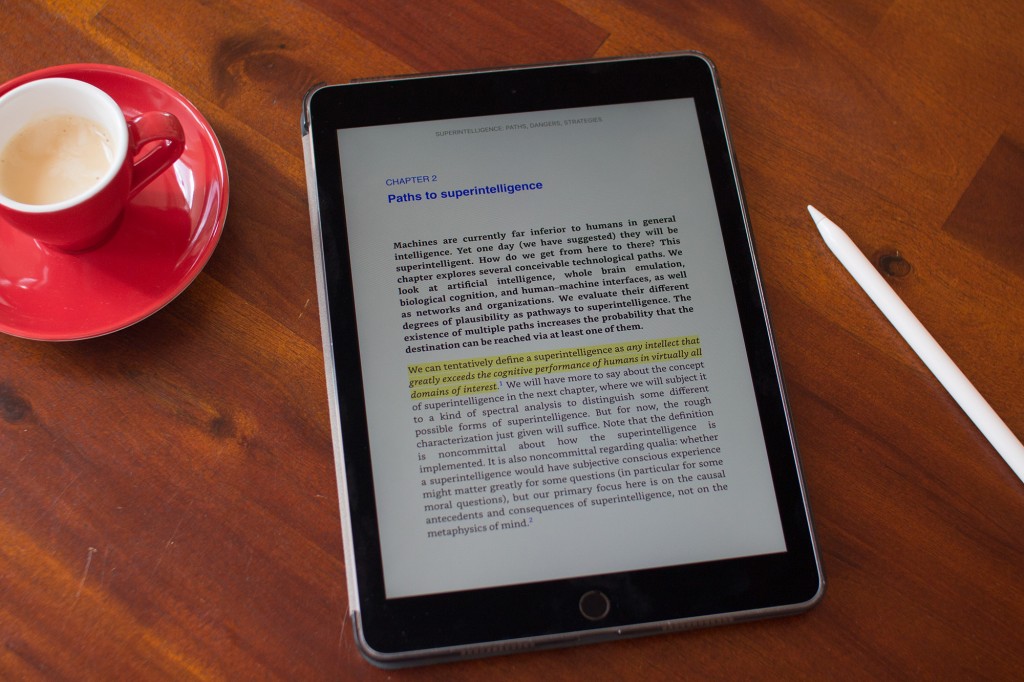 The iPad is really versatile – and great for ebooks.

Where I did miss my MacBook:

You can get an incredible amount of work done on an iPad. If I ever did find myself frustrated that I couldn’t do something on the iPad, most times it turned out that I could do it; I just needed to do it in a different way.

When you spend a few days using the iPad for everything, you come to appreciate how versatile it really is. One minute you’re typing up a report or an email, then you’re reviewing and annotating a document with the Pencil. After that, you might sit back and browse the web, look at your photos, and then open up the Kindle app and continue reading your book – all from the one device. I would argue that no other device has come anywhere this close to being truly one device for everything. 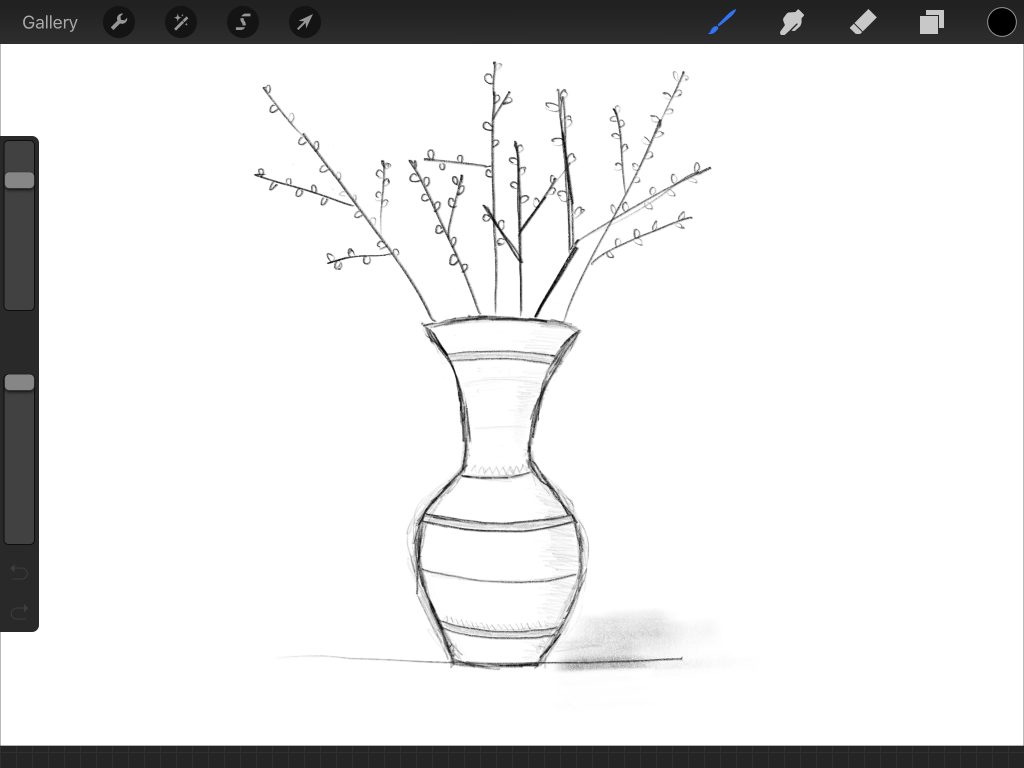 I’m clearly never going to be an artist, but it’s quite impressive what even a layman can achieve drawing on the iPad Pro with the Apple Pencil 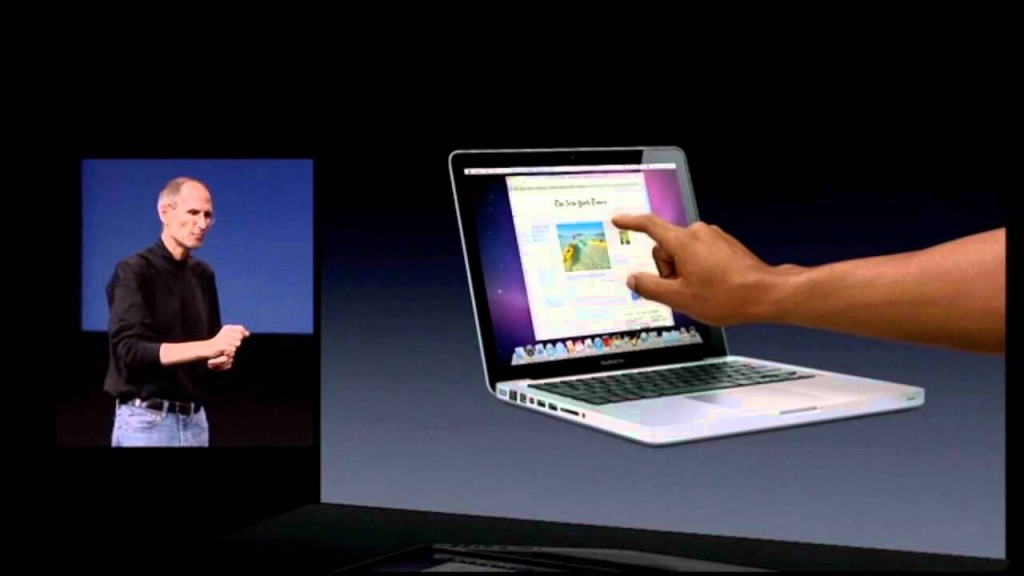 Steve Jobs famously said at the launch of the iPad that having a touch screen on a laptop would be “ergonomically terrible”.

Factories must be awfully dull places. Factory workers working on a production line follow a strict process. Work is divided out into narrow and highly controlled portions. The guy working at machine #1 is an expert at machine #1, but not at machine #2 or #3. But that’s ok; if he stays focussed on his machine, the production line moves on and many widgets will roll off the end.

Factory workers take a given process or specification and assemble it. That the solution is provided is a given. There’s no room for initiative or individual innovation on the factory floor. If one machine doesn’t produce output of exactly the right type at exactly the right time, the system breaks down. Process improvement and innovation is for senior managers; observing the factory floor below from an air-conditioned room behind a wall
of glass.

In the early 1800s the factory revolutionised the production of goods and heralded the onset of the industrial era. It raised millions of people from poverty and created countless jobs (and millionaires). It brought about a new kind of competition: one fought along the bottom line. The problem with the factory is that the race to the bottom is over: we hit it long ago. When every factory can produce widgets as cheaply as you can (or cheaper), your ability to differentiate lies elsewhere – it’s not enough just to be able to sell widgets cheaper than anyone else.

Luckily in the software product business we’re not factory workers. We encourage individual initative. We challenge our teams to help us improve our processes. We believe that innovation can (and should) come from anywhere.

If that’s true, why do we keep treating our teams like factories, and our people like factory workers? Why do companies push solutions to teams and expect them to be just assembled, (where possible by yesterday), without asking too many questions or making a fuss? Why do organisations rebuff any innovation or ideas that don’t come from their own team? Why do we incentivise teams and individuals on the quantity of output, and not the quality or impact?

It’s not enough to talk about supporting innovation and encouraging initiative… our daily working process has to support it too; otherwise, we’re just another factory.